Local No. 387 is proud to congratulate Cody Nathaniel for placing 2nd in the 2018 Southeastern States Apprentice Competition held in Jacksonville, FL. 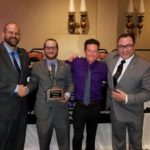 Both Cody Nathaniel and 2017 Apprentice of the Year, Michael Mernagh will be among four Iron Workers representing the Southeastern States District Council at the International Apprentice Competition in September. Competition between the 14 competitors was very intense and all Locals were represented well.