Today in Labor History – May 31st 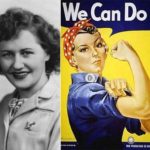 1997 – Rose Will Monroe, who became known as “Rosie the Riveter” died at the age of 77. Rose worked at an aircraft parts factory during World War II, and was “discovered” by filmmakers producing a film promoting war bonds. The song and the iconic poster were already well known and a real-life Rosie who was a riveter “proved too good for the film’s producers to resist,” said Monroe’s daughter.