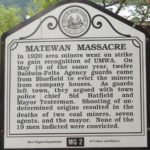 Ten people were killed when coal company officials in Matewan, West Virginia, tried to remove striking union workers from coal company housing. They sent in agents from the Baldwin-Felts detective agency who evicted several families before trying to hop on a train out of town. Sheriff Hatfield, who supported the miners’ right to organize, tried to arrest the detectives who, in turn, tried to arrest Hatfield. Unbeknownst to the detectives, they had been surrounded by miners. No one knows who shot first, but when the smoke had cleared, there were 7 dead detectives (including Albert and Lee Felts) and 4 dead townspeople. The episode became known as the “Matewan Battle” or “Matewan Massacre,” and is depicted in John Sayles’ film Matewan. It should be pointed out that mining was one of the most dangerous and corrupt industries around. Miners were typically forced to live in a company town and purchase living necessities from company stores at inflated prices. They were paid in scrip, which was useless outside of the company towns. In the time leading up to the Battle of Matewan, numerous miners had been assassinated by vigilantes, goons or detectives. In the aftermath of the massacre, the miners went on strike and were treated to even more violence. Striking miners were beaten and left to die in the streets. The remaining Felts brother, Tom, instigated a vendetta against Sheriff Hatfield, eventually having him killed by his agency in 1921.