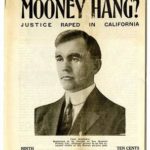 Tom Mooney‘s scheduled date of execution was stayed while the case was appealed. Mooney ultimately spent 22 years in prison for the San Francisco Preparedness Day Parade bombing in 1916, a crime he did not commit. Mooney, along with codefendant Warren Billings, were members of the IWW and were railroaded because of their union affiliation. – 1917