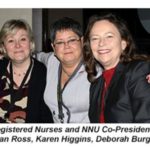 boiler operators from 11 cities across the country meet in Chicago to form the National Union of Steam Engineers of America, the forerunner to the Int’l Union of Operating Engineers. Each of the men represented a local union of 40 members or fewer.

2009 – Delegates to the founding convention of the National Nurses United (NNU) in Phoenix, Ariz., unanimously endorse the creation of the largest union and professional organization of registered nurses in U.S. history. The 150,000-member union is the product of a merger of three groups.