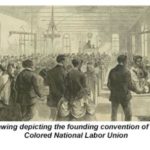 1884 – The Washington Monument is completed in Washington, D.C. On the interior of the monument are 193 commemorative stones, donated by numerous governments and organizations from all over the world; one of them is from the Int’l Typographical Union, founded in 1852. In 1986 the ITU merged into the Communications Workers of America.

1997 – United Mine Workers begin what is to become a 110-day national coal strike.