Today in Labor History – December 05, 1911 – Union Iron Workers John T. and James B. McNamara are sentenced to 15 years and life, respectively, for involvement in the dynamiting of the Los Angeles Times building during a drive to unionize the building trades in the city. They placed the bomb in an alley next to the building, 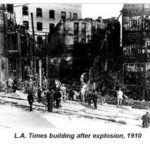 set to detonate when they thought the building would be empty; it went off early, and an unanticipated gas explosion and fire did the real damage, killing twenty people. The newspaper was strongly conservative and anti-union.

1955 – Ending a 20-year split, the two largest labor federations in the U.S. merge to form the AFL-CIO, with a membership estimated at 15 million.

1999 – AFL-CIO President John Sweeney welcomes the collapse of World Trade Organization talks in Seattle, declaring, “No deal is better than a bad deal.”

2008 – The U.S. Department of Labor reports employers slashed 533,000 jobs the month before—the most in 34 years—as the Great Recession surged. The unemployment rolls had risen for seven months before that and were to continue to soar for another 10 months before topping 10 percent and beginning to level off late the following year.