Today in Labor History – December 19, 1907 – An explosion in the Darr Mine in Westmoreland Co., Pa., kills 239 coal miners. Seventy-one of the dead share a common grave in Olive Branch Cemetery. December 1907 was the worst month in U.S. coal 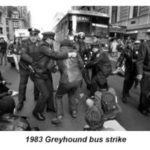 1983 – A 47-day strike at Greyhound Bus Lines ends with members of the Amalgamated Transit Union accepting a new contract containing deep cuts in wages and benefits. Striker Ray Phillips died during the strike, run over on a picket line by a scab Greyhound trainee.

1984 – Twenty-six men and one woman are killed in the Wilberg Coal Mine Disaster near Orangeville, Utah. The disaster has been termed the worst coal mine fire in the state’s history. Federal mine safety officials issued 34 safety citations after the disaster but had inspected the mine only days before and declared it safe.