Today in Labor History – December 11, 1886 – A small group of Black farmers organize the Colored Farmers’ National Alliance and Cooperative Union in Houston County, Texas. They had been barred from membership in the all-White Southern Farmers’ Alliance. Through intensive organizing, along with merging with 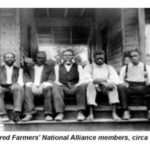 another Black farmers group, the renamed Colored Alliance by 1891 claimed a membership of 1.2 million.

1951 – Ten days after an Illinois State mine inspector approved coal dust removal techniques at New Orient mine in West Frankfort, the mine exploded, largely because of coal dust accumulations, killing 119 workers.

1968 – The U.S. Department of Labor announces that the nation’s unemployment rate had dropped to 3.3 percent, the lowest mark in 15 years.

1995 – Forty thousand workers go on general strike in London, Ontario—a city with a population of 300,000—protesting cuts in social services.