Today in Labor History – November 29, 1934 – Clerks, teamsters and building service workers at Boston Stores in Milwaukee strike at the beginning of the Christmas rush. The strike won widespread support—at one point 10,000 pickets jammed the sidewalks around the main store—but ultimately was lost. 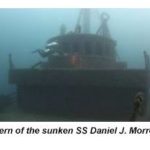 Workers returned to the job in mid-January with a small pay raise and no union recognition.

1966 – The SS Daniel J. Morrell, a 603-foot freighter, breaks in two during a strong storm on Lake Huron. Twenty-eight of its 29 crewmen died; survivor Dennis Hale was found the next day, near frozen and floating in a life raft with the bodies of three of his crew mates. He had survived for nearly 40 hours in frigid temperatures wearing only a pair of boxer shorts, a life jacket, and a pea coat.