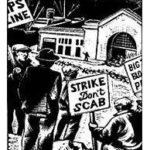 1888 – The time clock is invented by Willard Bundy, a jeweler in Auburn, N.Y. Bundy’s brother Harlow starts mass producing them a year later.

1968 – A total of 78 miners are killed in an explosion at the Consolidated Coal Company’s No. 9 mine in Farmington, W. Va.

2008 – The Great Recession hits high gear when the stock market falls to its lowest level since 1997. Adding to the mess: a burst housing bubble and total incompetence and greed—some of it criminal—on the part of the nation’s largest banks and Wall Street investment firms. Officially, the recession lasted from December 2007 to June 2009.