1934 – The American Railway Supervisors Association is formed at Harmony Hall in Chicago by 29 supervisors working for the Chicago & North Western Railway. They organized after realizing that those railroaders working under their supervision 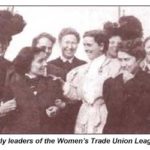 already had the benefits of unionization and were paid more for working fewer hours.

1934 – The Depression-era Public Works Administration agrees with New York City today to begin a huge slum clearance project covering 20 acres in Brooklyn, where low cost housing for 2,500 families will be completed. It was the first of many such jobs-and-housing projects across the country.

1938 – The National Federation of Telephone Workers—later to become the Communications Workers of America—is founded in New Orleans.