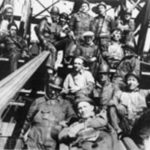 1933 – Construction of the Golden Gate Bridge begins. Ten of the 11 deaths on the job came when safety netting beneath the site—the first-ever use of such equipment—failed under the stress of a scaffold that had fallen. Nineteen other workers were saved by the net over the course of construction. They became members of the (informal) Halfway to Hell Club