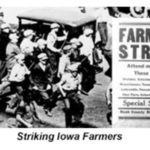 Iowa’s Farmers Holiday Association threaten to lynch banking representatives and law officials who institute foreclosure proceedings for the duration of the Great Depression.

1961 – What many believe to be the longest strike in modern history, by Danish barbers’ assistants, ends after 33 years.