Today in Labor History – January 16, 1883 – The United States Civil Service Commission was established as the Pendleton Act went into effect.

1920 – Thousands of Palmer Raids detainees win right to meet with 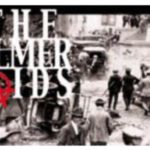 lawyers and attorney representation at deportation hearings. “Palmer” was Alexander Mitchell Palmer, U.S. attorney general under Woodrow Wilson. Palmer believed Communism was “eating its way into the homes of the American workman,” and Socialists were causing most of the country’s social problems.