Today in Labor History – January 15, 1915 – Wobbly Ralph Chaplin, in Chicago for a demonstration against hunger, completes the writing of the labor anthem “Solidarity Forever” on this date in 1915. He’d begun writing it in 1914 during a miners’ strike in Huntington, W. Va. 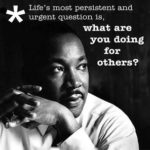 The first verse: When the union’s inspiration through the workers’ blood shall run, There can be no power greater anywhere beneath the sun; Yet what force on earth is weaker than the feeble strength of one, But the union makes us strong!

1919 – Seventeen workers in the area die when a large molasses storage tank in Boston’s North End neighborhood bursts, sending a 40-foot wave of molasses surging through the streets at an estimated 35 miles per hour. In all, 21 people died and 150 were injured. The incident is variously known as the Boston Molasses Disaster, the Great Molasses Flood and the Great Boston Molasses Tragedy. Some residents claim that on hot summer days, the area still smells of molasses.

1929 – Martin Luther King Jr. born. Dr. King was every bit as committed to economic justice as he was to ending racial segregation. He fought throughout his life to connect the labor and civil rights movements, envisioning them as twin pillars for social reform. King’s speeches on labor rights and economic justice underscore his relevance for today. They help us imagine King anew: as a human rights leader whose commitment to unions and an end to poverty was a crucial part of his civil rights agenda.

1938 – The CIO miners’ union in the Grass Valley area of California strikes for higher wages, union recognition, and the 8-hour day. The strike was defeated when vigilantes and law enforcement officials expelled 400 miners and their families from the area.

1943 – The Pentagon, to this day the largest office building in the world, is dedicated just 16 months after groundbreaking. At times of peak employment 13,000 workers labored on the project.

1946 – Some 174,000 members of the United Electrical, Radio and Machine Workers union (UE) struck General Electric and Westinghouse after the power companies, with record-setting profits, offered just a half-cent per hour increase. After nine weeks, the strike was settled with an 18.5 cents hourly wage improvement.