Today in Labor History – January 11,1912 – The IWW-organized “Bread & Roses” textile strike of 32,000 women and children begins in Lawrence, Mass. It lasted 10 weeks and ended in victory. The first millworkers to walk out were Polish women, who, upon collecting their pay, 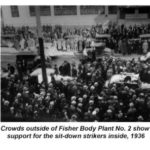 exclaimed that they had been cheated and promptly abandoned their looms .

1936 – Nearly two weeks into a sit-down strike at GM’s Fisher Body Plant No. 2 in Flint, Mich., workers battle police when they try to prevent the strikers from receiving food deliveries from thousands of supporters on the outside. Sixteen strikers and spectators and 11 police were injured. Most of the strikers were hit by buckshot fired by police riot guns; the police were injured principally by thrown nuts, bolts, door hinges and other auto parts. The incident became known as the “Battle of the Running Bulls”.

1995 – National Hockey League owners end a player lockout that had gone for three months and ten days. A key issue was owner insistence on a salary cap, which they won.